Using the Triangle to Open Up Space on the Attack

A few years ago, I did a quick video dissection of Joe Pavelski’s over time goal against the LA Kings. This video shows perfect execution of one of the Attack Triangle options we outline in the Coaches’ Training Course and in the Playbook. Here’s a quick summary of how it works on this play: 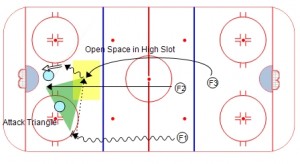